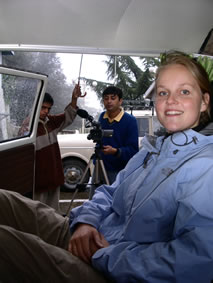 -Hello there, may i ask you a question?

-What is the purpose of your journey?

-Well, we are travelling for a charity fund called SOS Children’s Villages and are on our way to China. We hope to get as much publicity as possible for SOS!

-All the way to China in that car? Very good! Well, I am a reporter for Indian Television and I would like to film you and the car this afternoon, if it’s no trouble…..?

-Well, not at all…. Which channel?

And this is how another weird day started. As the heavens opened up and it kept raining for a while, we started with the interview straight away. Then, when the rain stopped we were filed in the car and had to tell everything about the car. We were told that only a few Hindi movie stars had a car like a camper but that our car, and the journey and the reason for travelling was unique. We drove around town later that afternoon, filming bits and pieces and had fun. When we finished in the afternoon we asked how many potential viewers the channel has…