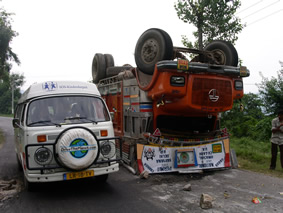 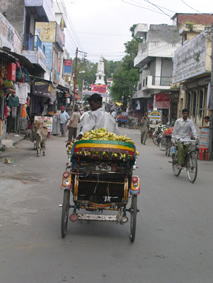 We left Shimla early in order to make it to rishikesh before dark. Driving, specifically in the Indian Himalayas is tiring. The roads are narrow (mostly just one lane), in a bad condition and winding all the time making driving difficult. We noticed we get more and more tired and are in need of a good rest or a way to get rid of the fatigue. Rishikesh, we hope is the place for this. Situated next to the ganges river it has become the central place in India for Yoga,meditation and lots of different courses. Reason enough for us to check the place out for a couple of days.

The views are wonderful and we enjoy the scenery while driving. Rice fields, waterbuffalo’s, schoolchildren walking to school in their uniforms, little wooden villages and cows sleeping on the street. India is great!

We stop halfway in a little village to have lunch and park the car near a little restaurant. As none of the villagers has ever seen a car like ours we attract a crowd within seconds. Indians are good at staring. A rude thing in Europe but very normal in India. We lock the car and let the alarm go off for a second. This trick we do every time we park the car to let everyone know we have an alarm.

In the restaurant we pick a table with a view on the car (out of sight of the crowd) and order lunch. There we notice that the crowd is still hanging around the car and Michel decides to become Michael Knight from the TV series Knight Rider. As soon as an Indian guy touches the car he lets the alarm go off using the remote control. This scares the crowd and they disappear immediately. But, curious as they are, one by one they come back.When another guy touches the car, again michel let’s alarm go off for a second. Now the locals think they are dealing with a car like night rider, KIT, and think it’s amazing. Another guy points his finger at the car and when he touches it…. Beep Beep Beep, the alarm goes off, this time a bit longer. Now they now they can’t touch the car and they all look at it from a distance. When we return from our lunch a guy comes up to us and sais: you have an amazing car, sir, may I have your autograph? We had to laugh but did not reveal the secret of the remote control….