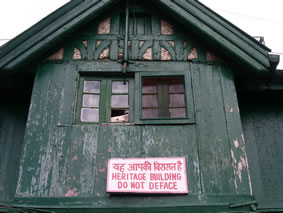 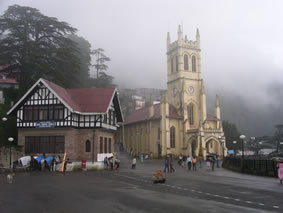 Shimla was an English settement during the times the English reigned India. To escape the heat from the plains they created a settlement high up in the foothills of the Himalaya. Yes, Shimla has still an overwhelming English touch to it. Even the weather is like England. It’s foggy most of the day and rain is more common then sunshine. The centre is even more Britisch with an nice English church where it’s possible to attend Sunday prayers. We walked around and enjoyed the heritage the Brits left behind. It’s a shame that many of the buildings are rotting away although there are signs telling that the heritage must be saved.

One thing in the centre was particularly funny. In the middle of the square stands a policeman all day to look after traffic. Not traffic as in cars but pedestrians?? If you are standing still too long, he blows a whistle and orders you to move!

Then there are the monkeys. Again Michel (the monkey man) nearly got into a fight with one. But he wasn’t the only one. Everywhere the monkeys were looking for food, climbing houses and hotels and all. Shimla is a nice break from Indian hustle and bustle.