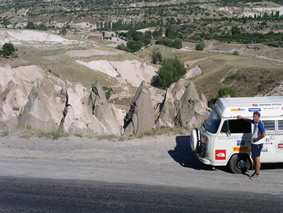 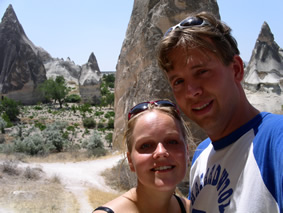 The road from Kiskalesi to Cappadocia was perfect. In the morning we fiddled around with the wires from the headlights and more important the oiltemperature meter and got it all working again. Thank god for the simplicity of VW oldtimers!

The road took us through beautiful farmland and in between mountains. We enjoyed the scenery so much that we nearly did not see the policeman with a stopsign. Okay, this was it.. time to pay a fine for ‘not’ speeding or doing anything wrong. But this policeman had other ideas. He just wanted to see our van, probably because its full of stickers, and wanted to give us directions. Pfeww, now that was lucky!

An hour later we got to Cappadocia. Cappadocia is well known for its bizar and moonlike landscape and Goreme is the place to spent your time. We nearly got to Goreme and saw the pinnacles. Beautiful they were but not so many. We parked the car alongside the road and started to make pictures. We were not impressed after hearing so many stories. Moonlike landscape.. its only twenty pinacles coming out of the ground…

We jumped in the bus and followed a bent in the road. Nooo waaaay. Thousands of Pinnacles suddenly appeared around the corner. We had stopped at the far end and had not seen anything yet. We braked, parked the car and jumped out. This was amazing. It actually looked like a moonlandscape. How bizar, how beautiful, how eerie….

We headed for the Kelebek pension in Goreme for the real Cappadocian experience. The great thing about the pinnacles is that people have lived in them for ages and dug great caves in them. Some of these caves have been turned into hotels/pensions. We were advised to visit the Kelebek pension for its great rooms and service. When we got there and told our story, we were invited to stay in the honeymoon suite cave, which includes a jacuzzi (haha… so we’re not married, we just stayed in a honeymoon suite) . Believe us, a better way to get rid of dust from the roads is a jacuzzi. That evening we had a nice dinner on the balcony and saw a full moon rising up on the horizon. Woooouuwwww. This place is perfect.. we are sold!