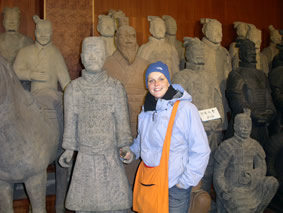 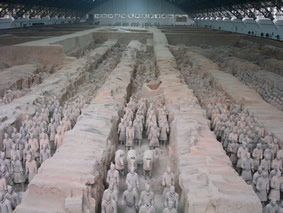 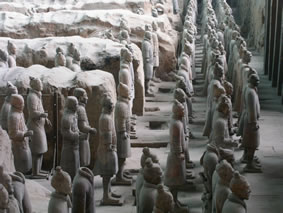 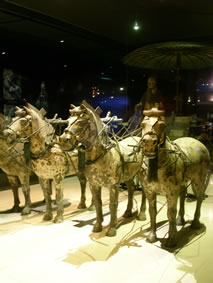 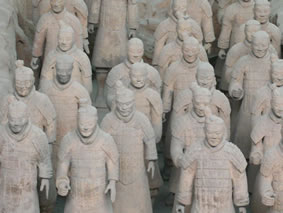 Xi-an is famous for the terracotta warriors. But there is more to see in Xi-an. The belltower, the moslimquarter and the old citywall are few of the many sights to visit. We head to the terracotta warriors first. We enjoy the public busride and watch the scenery. Our eyes fall on huge billboards asking people to be honest and pay taxes as it supports the local economy. We wonder if it has any effect.

Just before we get to the terracotta army we see a lot of warriors beside the road. Not the real ones but replica¡¯s (we hope). Nice for in your garden! Yes, the area is heavily touristy and the worst thing we see is a huge pyramid with an even bigger sphinx in front of it. Gosh¡­ who would be interested in visiting that?? As soon as we get out of the bus we are jumped upon by people trying to sell us little terracotta warriors. We say we have to see them first and that helps.

We pay the 60 yuan entrance fee and have a look at a 360 degrees introduction video first. A great and interesting video about the emperor Qin and the building of the army. Then it¡¯s time for the real thing. Wouw, yep it is cool. Hundreds of unearthed warriors, all with different poses or expressions are standing in a huge hall. It¡¯s a mad idea that more then 6000 were made in order to protect the tomb of the emperor. But then again, the Egyptians built the pyramids. We walk around and then realise people are filming. We forgot our videocamera! The biggest highlight of China and we forget the camera. Stupid! We take pictures instead but still feel like morons.

There are three pits with unearthed warriors. Number one is the main attraction with a lot of warriors. Number two is a special vault with some horses, broken and damaged warriors and some good ones. Number three is the biggest pit. But here there isn¡¯t much to see as archaeologists are still at work. Well, not when we are there and everything is covered by plastic. Three glass boxes contain beautiful warriors though. But a close look also reveals another thing. We cannot notice the difference between the replica¡¯s and the real thing. We laugh and come up with the conspiracy theory that the whole thing about the 6000 piece huge army is made up as a money making scheme and that all but these three statues are fake. It is China¡¯s biggest tourist attraction after the great wall! Hahahaa maybe that is fake as well!

The last building (number 4) contains two beautiful bronze carriages in a beautiful state with horses and all. Yep, this is craftsmanship! We walk around for a while and finish the tour. As soon as we leave the museum we are again jumped upon by salesmen and women. As prices are the lowest here then anywhere else in China we fall for it and by some souvenirs.

In the late afternoon we visit the Muslim quarter. A lively area with food stalls and a street full of goodies and gadgets shops. The centre of town is marked by the bell and the drumtower. Both landmarks, especially the belltower, are magnificent at night. According to plan we would leave tomorrow but we have already decided. Were staying another day¡­ not only to film at the terracotta army but also to enjoy this fabulous city!