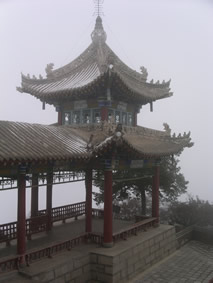 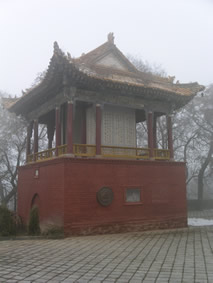 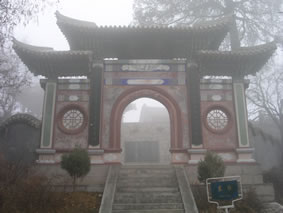 A rapid growing economy which is changing from communistic to social capitalistic brings bad things as well. Every major town we visit has dozens and dozens so called beauty parlour shops were young girls wait for their customers. Officially they offer haircuts and massages but we wonder if they can really cut your hair. Prostitution is big business in China. Every hotel we enter has hourly rooms on the pricelist. The competition is hard apparently as we find out. Sick as we are, we try to get a good night sleep and make one mistake. We forget to unplug the telephone. Why do you have to do this, you might wonder? Well every half an hour your telephone will ring. When you pick up you will hear a ladies voice brabbeling something in Chinese. When michel asks them if they speak English they will say¡­wanna massage and then start giggling. When elles picks up the phone the line is disconnected. After a while we have enough of it and finally unplug the phone.

Jason, our guide, also wants to see all the highlight and scenic spots. Sometimes even more then we want it as he can uses his newly found information for next jobs. He has never been to the region before. After being sick we cannot be bothered at first to visit the Kongtong Shan mountain to see some pagoda¡¯s. Apparently Jason had called last night twice to find out about our plans as he really wanted to visit the scenic spot. But the phone was unplugged. Elles stays in bed and Michel decides to drive there with Jason.

Some 14 km away from Pingliang are the mountains. Accessible by foot but also by car. We only have till twelve (checkout time) so cannot visit everything. So the entrance price (60 yuan) is quite steep. This also counts for the road up there which is the steepest hippie has ever driven. Sometimes with spinning wheels we climb the mountain. But, even though there is a lot of fog, it is rewarding. Maybe it is because of the fog as it makes the place a bit spooky. We visit a Taoist temple and a Buddhist temple with a nice pagoda next to it. In the distance we hear monks performing the morning prayer. We have only little time and actually see one tenth of the things to see and rush back to the hotel.

Elles feels a bit better but is still weak. We quickly update the site and send the column to the newspaper before leaving to Xi-an, home of the famous Terracotta Army. The roads are again very bumpy. Driving is more difficult on this stretch because of the heavy traffic. We find it irritating that a three lane highway is used so inefficient. The first lane is used for parking cars, stranded trucks and pedestrians. The second lane is used by us and all sorts of driving vehicles. The third lane is again used by pedestrians and cyclist but then in the opposite direction causing dangerous situations. The trucks on the lane we are on are only driving 40 kilometres an hour. A moped is even faster. Overtaking is difficult and dangerous.

China is also the number one country on our list in terms of accidents. Every day we see big crashes. Most of the times trucks are involved or little three wheeled lorries. We know why lorries are involved as they don¡¯t look when crossing the street or when turning. Trucks are in a horrible shape and overloaded five times they can handle. Brakes overheat on hills and we see many many trucks ending up in ravines or in ditches beside the road. Today we are lucky. As we stop just before a bend in the road to ask directions a car passes. Around the bend it crashes directly into a small lorry which was crossing the road without checking the traffic. Luckily all passengers are not hurt but both vehicles can go to the junkyard.

Just before we enter Xi-an, road maintenance has broken up the road. The road consists only of mud and is changed into a four wheel drive track. After six hours of driving this is the last thing we want. We crawl through the mud and dirt and are happy not to get stuck on some huge rocks. Then we notice a man alongside the road. Jason explains this man has a new job. Because the road signs are difficult to understand, this man offers you to get you out of the city for a mere 20 yuan! When we ask why the government doesn¡¯t changes the signs he says it is normal in China. Even Beijing has students doing the job in the evening. We don¡¯t make use of the service as we have a compass on our watch and continue heading east. Just after dark we reach Xi-an.