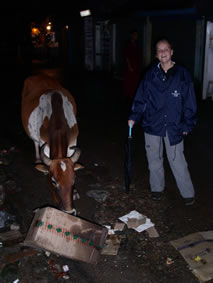 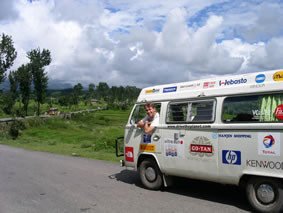 The road was reasonable all the way to Manali. But the road was a single lane road, they call this a national highway (???), which was winding through the hills. Even worse was the fact that it was full of difficult to evade ‘holy cows’. Therefore our average speed dropped till 20 kilometres an hour.

Cows in India are ‘amazing’. There is a saying ‘calm as hindu cows’ and we know why. Nothing, and we mean nothing in world can make them move, stressed out or busy. For centuries, Indians have worshipped cows and won’t hurt or bother them in anyway….. and the cows know it. Grand Mother Cow has told her daughter who have told her daughter and so on. And this has been happening for centuries making the cows….. well arrogant. You find them everywhere. In the middle of the highway looking at traffic, wandering around the markets nibbling on pieces of plastic or standing in that small little alley you have to be in. This is India!

Somewhere halfway, something weird happened. As you may have noticed, we have a bullbar built on our camper in case we hit a large animal. But what happened today we did not expect at all. We were driving along this road and came across a twenty or so horses being hurded towards the nearest village. We stopped to let the herd pass by. All horses except one step aside. This one horse had different plans and came straight for the car and hits his head against the bulbar. We were startled for a second and the horse as well. Luckily the fire department had done a great job and the ‘horsebar’ wasn’t damaged (this also accounts for the horse!) We stood there for a while looking at the horse who had just found out what a bullbar is for before continuing his was. We continued our way as well, laughing and arrived late in Manali.

« To the heart of the Himalaya High Altitude »