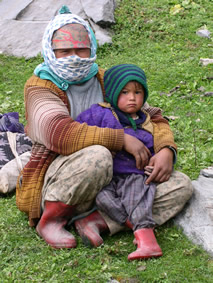 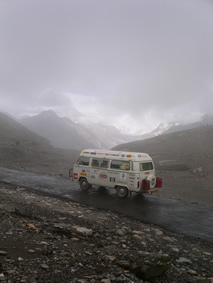 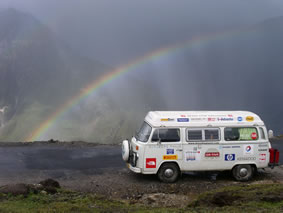 We didn’t sleep well for two reasons. Elles got a message that her brother had become a father of a healthy son and we were both very much excited. I couldn’t sleep as driving to Leh didn’t feel right and i had the feeling i was overlooking something. We had heard a rattling sound on the way to Manali and thought it was the jerrycans on the back. But a little voice told me it could be something else. Then there was also the handbrake that needed adjustment. My mind kept working overhours and when i finally started falling asleep, an attack of mosquitos started and kept us awake some more.

We didn’t wake up from the alarm and woke up 2 hours later at nine. Too late to start the journey to Leh if we wanted to do it in two days. We inspected the car front to back and then we saw what was making the rattling sound. One of the shockabsorbers on the back missed a shockrubber. Every time we hit a hole in the road the suspension would hit the frame and not the rubber. We were lucky to have noticed now and not later as it would have damaged the car. Luckily we had brought an old spare one and installed it. Then we adjusted the handbrake and headed into town for the latest information on the road.

We asked several organisations and were told that the road to Leh had huge rivercrossings which could only be crossed in the morning. Due to heavy rainfall there had been some landslides but those were cleared leaving awful roadconditions. Was it worth the risk we asked ourselves. We would see much more of the himalaya in Pakistan on the Karakoram Highway. Was it worth damaging the car. We had not seen any volkswagens in India yet and none of the locals had seen a car like ‘hippie’ before. We decided, a difficult decision we must say… that it wasn’t worth the risk. We think it’s better to take calculated risks in Pakistan where there are spareparts so we are sure to make it to China. And China is still our goal!

As we wanted to test the car in terms of driving at altitudes, we decided to make a daytrip to the rotang pass (3975 meters high). This is the first stage of the road to Leh and is still in a good condition. ‘Hippie’ took the road as it came and without too much trouble brought us all the way to the top.There we entered the world of clouds and even drove throuh hail falling from the sky. A few kilometres before the top we had a little lunch before continuing our way. Then we passed the top and continued a bit down the winding road. The views were spectaculair with huge mountain backdrops, some glaciers and deep gorges. Yes, it was tempting to continue but as we had made it into a daytrip, we did not bring enough fuel to head for Kaza or Leh. So, there we were admiring the view. When suddenly a rainbow appeared we knew it!

In the famous words of Arnie Schwarzeneger: We’ll be back!