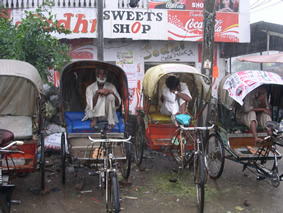 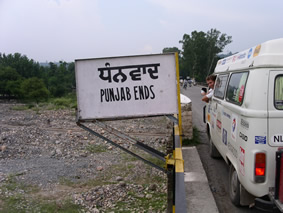 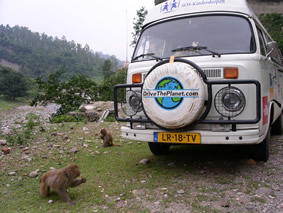 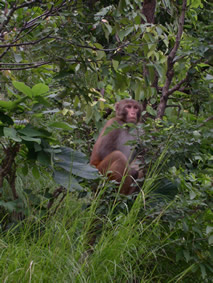 It¡¯s still early in the morning when we check the car and engine a second time. When we are finished we leave Amritsar and head North. We soon leave the state Punjab and enter Himachal Pradesh, home of a large part of the Himalayas. The height of the mountains will be a complete other test for the car as well as for us.

We are welcomed with a massive monsoon shower. The roads turn into little rivers and daily live seems to stop. Most monsoon showers only last an hour or so but we decide to continue at a snails pace.

An hour and a half later, well in the foothills of himachal pradesh, we come across a large group of monkeys besides the road. We stop and have a look at the animals who are looking at us with the same curiosity. Let¡¯s feed them, michel sais and jumps out of the car. The monkeys dissapear but come back when they see me return with some pieces of toast. Wondering if i could get a great picture out of it i decide to put the toast on the front sparewheel. The monkeys see this and are well dissapointed with my efforts. Then the mood changes within the group and two monkeys become agressive.

I hereby thank the discovery channel for teaching me that when upperteeth appear, you are in trouble. I immediately step back towards the car hoping not to get bitten. I don¡¯t wanna think what kind of diseases they are carrying! The monkeys see me retreat and start charging. Lesson number two i¡¯ve learnt is that you should always show who¡¯s the boss. King Kong is the first thing that comes in my mind and i start making king kong noices. I guess they haven¡¯t seen the movie but it stops them for a split second. I, Elles is pissing myself laughing at this time but see its wise to open the door. Again i step back and again the monkeys charge.

Now they are coming close and i notice the king kong act is failing. I jump in the car and open the window. Tarzan, king of the jungle might help. Hooeeeeeeeeeaaaaaaahaaaaaaaa. I guess its the car that kept them away. We drive on leaving a few bewilderd monkeys behind………