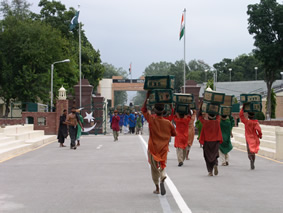 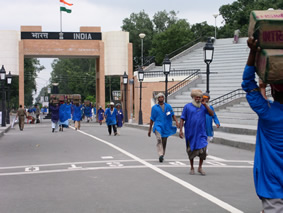 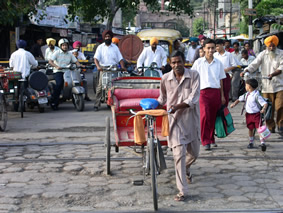 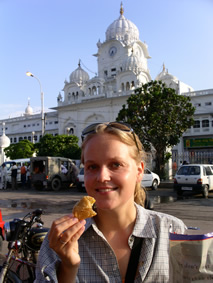 We left early in the morning to cross the border and head to Amritsar. We had slept on our guards all night as one of the men who worked at the PTDC border hotel had walked, ‘by mistake?’ into our room in the middle of the night. We were sure we had locked the place and decided to put a chair infront of the door afterwards.

The border officials who had done the whole show the evening before were highly interested in our film. So we parked the car on the border and showed them the film. All the men crowded around the camera to see what we had put on film. We also watched a truck being unloaded on the Pakistani side and men, dressed in green and red, carrying the freight on their heads to the Indian border. There, a group of men dressed in blue was waiting to take the freight and carry it to another truck. All this because the Pakistani truck was not allowed to drive into India. Luckily we were and without too much hassle we headed towards to Indian side. There we met a border official who wanted to know everyhing about our culture and know if its good or bad that boys and girls can have sex before marriage. We answered as good as we could as some answers were frowned upon with disbelief. The Indian officials were working extra slow and we had to cut the man short after a while son we could continue our way to Amritsar, home of the golden temple, a sacred place for the Sikhs!

We had difficulties finding Mrs Bandari’s Guesthouse (a place recommended by other overlanders) and when we got there, we parked the car, checked in and crashed on the room for an hour or so. Then we took a rickshaw to the Golden Temple.

Outside the golden temple it was crowded with thousands of indians walking around, having a free meal as provided by one of the temples free kitchens or preparing themselves before entering the site. We left our shoes at one of the counters and elles covered her hair with one of the orange shawls. We walked in and stood there for a while, in silence and in disbelief of the beauty that was in front of us; a lake with in the middle a shining golden temple. We followed the path around the lake listening to the chants coming from the temple. The chants are readings from a holy book that during the day lies within the temple and is safeguarded elsewhere at nighttime. We were amazed by the beauty and the serenity of the place, the people washing themselves in the sacred lake, and an wonderful crowd. We sat down to soak up the atmosphere and were approached by an old men. He told us his heart was dancing when he saw and asked us one thing. Tell your people at home this: The world needs more philosophers, not conquerers. We are all living on earth and earth is our home. Therefor, india is your home as well. Then he kissed our hands, blessed us with our journey and continued his way. So did we………