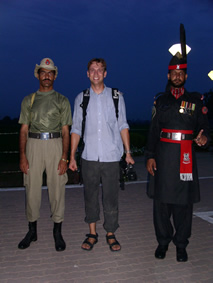 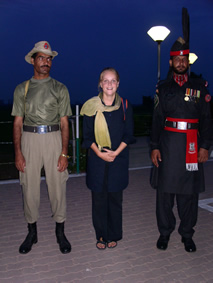 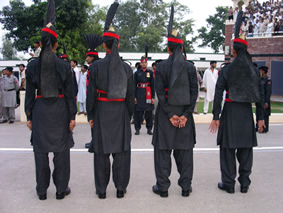 We are spending most of the day at the SOS-village in Lahore. We get a tour of the school and have lunch with the director of SOS-Pakistan who informes us of all the rural and children projects SOS is involved with throughout Pakistan and stresses out that more funding is needed to help the poor. It is amazing to see how big SOS has become knowing that SOS Pakistan started in a home in Lahore, helping a few children.

In the afternoon, we knew we had to hurry. We said goodbye to everybody and headed towards Wagha. Wagha is the border between Pakistan and India and the only border open to foreigners. We had heard something about a flagceremony at the end of the day and were hoping to get a glimps of it. What we did not know was that the border closed at 5 and when we got there we were told we could only cross the border the next day! But there was PTDC, a state runned hotel where we could stay and we could ofcourse see the flagceremony if we were quick. So we grabbed the camera’s and ran to the border. The flag ceremony was about to start and as it’s normally illegal to film at the border we asked one of the guards.’Yes ofcourse’ and he directed us to a vip tribune so we could see everything happening righ in front of us on the lane leading to the border. On all sides there were tribunes, some for men, some for women. The crowd of hundreds and hundred of people was shouting ‘Pakistan, Pakistan…. and were encouraged by an old granddad dressed in green with in is hand a huge Pakistani Flag. On the Indian side the same happend with the same crowed shouting the name of their country trying to overwhelm the Pakistani crowd. It was mad!!

Then the real ceremony started and michel was given a position on the lane itself to have a good view with the camera. Unique as he could stand in between the official. The border officials, wearing special uniforms marched up and down the lane at high speed, saluting to their superiors with in the background an ecstatic crowd. Although a show, you could easily feel the tension between the two countries. Pakistan, Pakistan…. the crowd continued…

After about an hour or so the flags were lowered and the gates closed. Immediately after the gates were closed the crowed moved to the border to express their feeling to the indian side. Rangers who are protecting the border show their guns to prevent riots and keeping them from more. Then the crowd goes home. Some of the men are still full of adrenaline and clamp on to us. ‘What do you think of the show.. and what do you think of Pakistan?’ It is the rangers who ask them to move on and ask us to stay for a while untill the crowd has dissapeared. Fortunately as we were not feeling comfortable….

This ceremony happens everyday at the Pakistani and Indian border. It’s unique in the world and well worth a visit!