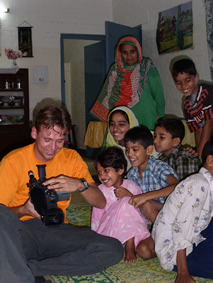 A father of three childeren decides he wants to get of his wife as he wants to marry another women. While his wife is breastfeeding the youngest of the three, the man bursts into the room holding a bucket of burning oil. The women sees her man coming and is just able to throw her child away and safe it from drama that happens next. The mother doesn’t survive the attack while her children are the only witnesses of the whole ordeal. The father is sent to prison and the children need a new place to stay. The three children are brought to the SOS-Children’s Village in Lahore where they are placed in a family with a mother and a few brothers and sisters. They are guided by a psychologist and learn to deal with their past. The SOS-Children’s village and especially the mother is looking after the children for two years now. We saw how much care and love they receive from their new mother. They have become her children and for the children its their mother. The children are in peace with what happend and grow up in a safe environment where they can go to school and are looked after. We were silent for a bit after hearing the story and visiting the mother with her children.

SOS has 7 villages throughout Pakistan. Every village takes care of about 200 children. As well as in Lahore, the village we are visiting. SOS-Children’s village has 16 houses. Every mother in the village looks after 10 to 12 children. All houses have a girlsroom, a boysroom, a room for the mother, a livingroom and a kitchen. The mother takes care for breakfast in the morning, provides lunchpackages for at school, cooks at night for the children and give a lot of love to the children. This village has also medical, dentist and schoolfacilities. These facilities are not only for the children from the village but also for children from the area. The school for example has a capacity for 1500 children. Only children from families that have a montly income less then 5000 roepies (about 85 euro) can join the school. SOS makes it possible for children from poor families to attend class. In total the school had a capacity for 1500 children, only 100 children come from the SOS-Village. We decide to have a look at the the kindergarden classes and come across an amazing story.

Today a new girl has started. She is 8 years old and has never been to school. She was found by a man living on the side of the street together with her family. The man wanted to do something for the child and went to SOS-Children’s Village. Their they agreed that going to school and living on the street could not be combined and that the family needed a home. The man wanted to be a family sponsor so he arranges a small home, paid the first month rent and provided fruit for the father to sell. He then could earn money for the next months rent. The girl was given a uniform and we saw her attending her first day of school in her live (on the school of SOS Chilsdren’s villages). Everything was new for her and she could not stop smiling. She will be given special attention as she needs to catch up with the other children. She was lucky to find a sponsor in the man who found her as there are many many more children that live on the street in Pakistan.

So SOS-Childrens Villages does not only provide a long lasting home for orphan children but does a lot more. They look after Afghan refugee children by providing medical care, nursing homes and play grounds. In total there are more the 6 million refugees in Pakistan. SOS also has a lot of rural projects running where they built schools with the help of locals, guide people by obtaining work or make it possible for them to start their own business.

We had long conversations with the very nice and enthousiastic people who work here, talked with the children and are very much impressed with the work of SOS-Childrens Villages. We know that all donations are going directly to what is needed the most. Providing long lasting homes for those who need it the most, scholing for kids and rural projects in area’s that are struck by poverty. So if you want to become a donor, have a look on their website for more information:

Dutch people can make donations to: