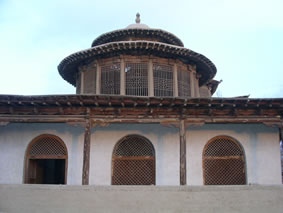 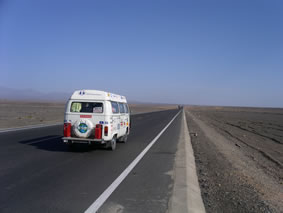 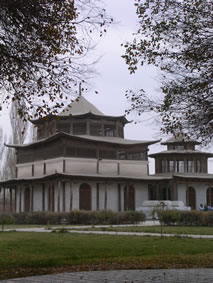 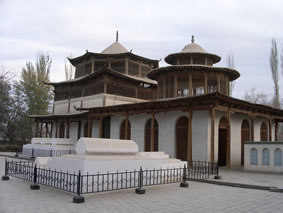 Sometimes, during your travel you find that one place that hasn¡¯t been discovered by the mass tourism industry. It is one of those places you are not sure of if you should share it with the rest or keep it that secret place. This is one of those places. We enter the compound containing the tombs. Two of the three tombs are very special. The three layers of the building are built in different styles. The bottom layer is Islamic, the middle layer (made of wood) is Han-Chinees, the upper layer (made of wood and mud) is Mongol style. The roof of the first building is made like the head of Djengis Khan. Those buildings, built around 1900, have all graves of the Uygur Kings and princesses. Apart from that there is also a beautiful mosque with 180 wooden pillars that should keep the roof where it is. There is enough room for 5000 moslims.

At night we go for dinner together with Jason. Since we find it difficult to decide what to eat, we ask Jason to do some suggestions. And that¡¯s something he really likes. He starts suggesting to take pig feet, or even better pig meat in boiling pig blood. The people sitting next to us are eating that last meal and it doesn¡¯t look very nice to us. Another speciality from the region should be pig intestines. This is something Jason is talking about already for a week. We tell him he should take it but we prefer something else. He says he is just joking but we are not really sure¡­ After some beers and two different meals made of chicken and fish Jason starts to get really funny. A Cantonese can eat everything with four legs, he says. Except for the table. And a Cantonese can eat everything with two wings¡­ except for an airplane. That¡¯s way I think Sars started in that region he whispers with a smile. Hmmm¡­

When we are walking to the hotel we ask Jason to help us to find an internet caf¨¦. But, since we have told him many times that we are very good in finding our way without speaking Chinese he want to see how we do it ourselves. Okay, we can do that. So as soon as we are in the hotel we walk to reception to start our ¡®we are looking for internet¡¯ show. The girls who know that Jason is our guide immediately start talking to Jason who tries to stay out of this. To save the situation he start acting that he doesn¡¯t have a clue what we are looking for. It¡¯s just such a funny situation. So then we try again, internet.. e-mail and point at their computer. Then they understand and point us in the right direction. Jason is surprised that we made it!

We quickly update the website before it is time to go to bed.

« Adoring the mummy… Boring can be beautiful »