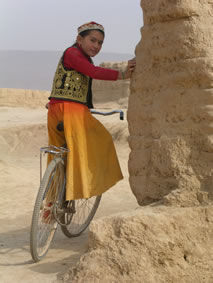 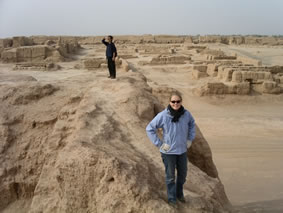 Ninety percent of the internetcafe¡¯s we find just cater for gamers and have banned the use of floppy disks to prevent themselves from virusses. Till late at night we wonder around Turpan but with no luck. When we get back to the hotelroom we notice a cockroach on the room. Then we spot another and another one and another one. A close look of the room reveals the that our room is not only occupied by us but also by hundreds of cockroaches in all different kinds of sizes.

To prevent the luggage from getting infested michel places it in the bus and ask the hotel to help us get rid of the other occupants. Elles, by this time has already killed more then twenty. Then the staff arrives with a spraycan and loosely sprays the corners of the room. We want her to be rigorous but she closes the door and sais we have to wait. Euuuh well, how long? Twenty minutes she sais and leaves with a smile.

So there we are sitting on the hallway in the middle of the night. Too bad we can¡¯t sleep in the bus we think. But then we come to the conclusion that this is ridiculous and ask for another room. This has to be approved by someone else but twenty minutes later and two phonecalls, we get one. We get our stuff out of the, by this time still, toxic room. The new room is better but all night we dream of bugs and other little critters.

When we wake up we are dead tired of out bugadventure. We have a local bread for breakfast and then do some sightseeing. We visit another deserted city (Gaochang Ruins) which is more vast but less detailed then the Jiaohe ruins we visited earlier. The Gaochang ruins are a former Uygur Capital and dates back the 7th century. We walk aorund and have fun with two little girls who are hanging around the place. Then we visit the Astana graves. Here the dead of Gaochang were buried. In the first grave we enter we stumble on two well preserved mummies. A weird thing to look at there as there are still facial expressions visible. Michel even notices the guys thingie hanging all dried up in the open and jokes about the ¡°not so asian size of it¡±. Jason doesn¡¯ t react.

Jason has more interest in the lady mummy and then sais she is very pretty. ¡®What???? Eeuhh Jason, we don¡¯t know if you have noticed but we are looking at a corps here which is all dried up. She could easily act in the horrormovie ¡®return of the living dead¡¯. The only pretty thing about her is that she is looking ¡®pretty¡¯ awful.¡¯ ¡®Yeah, but she has nice long legs¡¯, Jason replies. We give up….. one week on the road and he is already adoring mummies! Another 4 weeks to go…. this is going to be something!

In the afternoon we visit the Emin Ta mosque. Nice in terms of design and fortunately not turned into a tourist trap. Too bad we can¡¯t climb the minaret but on the other we are quite tired and can use a bit of rest. So back at the hotel we sleep a bit, wash the car and write about this fabulous day in Turpan.

« The deserted city of Jiaohe A Hidden Juwel »