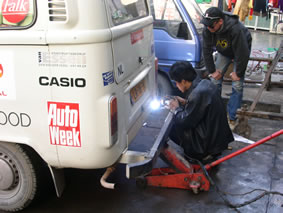 We leave Xiahe at around ten after saying goodbye to Anne and Paul, the two dutchies we met. Slowely we drive out of town. Not because of safety but ust because we want to suck in some more beautful images. We hope the road is better then when we arrived. Luckily the ice is melted and we don¡¯t get stuck in a traffic jam.

Still the road is very much bumpy and this lowers our speed till in between 50 and 60 k an hour. It¡¯s also bad for the remaing bumper which is getting more and more loose. So instead of bypassing lanzhou we decide to spend the night there and have someone looked at the bumper. We find a guy who can weld as soon as we drive into the city. But the damage caused earlier is too much and the welding doesn¡¯t hold. It will be a gamble if it will hold till Beijing.

We check in the same hotel near the trainstation. We have some work to do (update the site and all) and are looking for a quick meal. After all the chinese food we think it¡¯s time to indulge ourselves with a KFC chickenburger. Nice and clean food as you can expect from an american chain. But even before we arrive back on the room we notice the chickens are playing havoc in our stomachs. They don¡¯t seem to be happy with their new home. After about an hour on the room Michel feels horrible and runs to the toilet. The first chicken is freed from captivity. Weakend he returns and the scene continues all night. Elles who is feeling the same can¡¯t vomit but is wakend up by Michel all night as well. The one place you don¡¯t expect to get sick from the food. We have been eating in places in India where all consumer health regulations we defied and get a severe foodpoisening from KFC (or is the story real about the Kentucky Fried Rat). We feel horrible…..