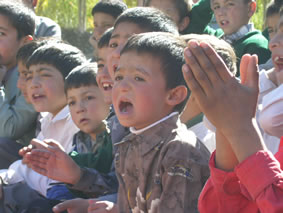 Sweating is not what we expected. But when we wake up and the sun is shining on our room and we are still tucked in our sleeping bags, this is what we do. The weather is changing by the minute. One second it¡¯s nice and warm, then a cloud moves in front of the sun and the next second it¡¯s cold. But this warm we had not expected. When we open the curtains we know why they call this the world roof hotel. The views on the surrounding mountains and the Hunza Valley are stunning and it actually feels like the roof of the world. But it gets better. As it¡¯s nice and warm, we can have breakfast on the roof of the hotel. We are in heaven.

At midday we head to the polo ground. A folklore festival called Silk Road Festival is being held here today and some local dancing and games are on the agenda. We feel lucky to be here on this special occasion. As we arrive we see that the whole village has gathered for the event. Then someone notices us and directs us to a VIP area where we are seated on one of the chairs. Nothing much is happening yet but the crowd and we await in silence.

An hour later nothing has happend and as we are getting colder and colder we decide to ask why. A man tells us that they are awaiting the Japanese ambassador and we have to wait a little longer. The festival will start as soon as he arrives. Then we meet a German couple and we exchange travelstories to kill time. Another hour passes and still no sign of the Japanese ambassador. The crowd still hasn¡¯t moved.

Then music starts and an old men starts to dance. Will this be the beginning. Nope, it¡¯s just to entertain the crowd. Then a ropefight is being organised. Two teams of each 12 men are struggling and holding on the rope. The crowd loves it. More men start dancing but we know this isn¡¯t the real thing and we are in doubt if it¡¯s ever going to happen. By this time we are very cold. As it was sunny in the morning we did not put on our cold weather gear. But as clouds rolled in the temperature dropped. So does the sun by now and still no sign of mister Japan.

5 dull hours later, we are just about to leave, when finally the Japanese delegation arrives. We are excited as this mean folklore time. But no… speech after speech after speech in which ¡®important¡¯ men talk about the relation between Hunza and Japan keep the party from starting. By this time its nearly dark and we are frozen. Guess what… as its dark the folklore is cancelled and the event ends or even better never started!! A frozen crowd, two germans and two disappointed Dutchies leave the Polo field.