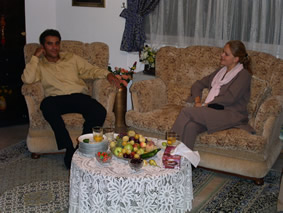 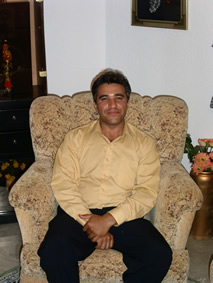 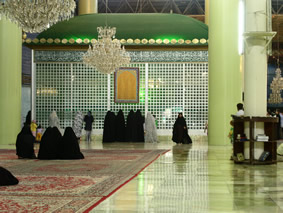 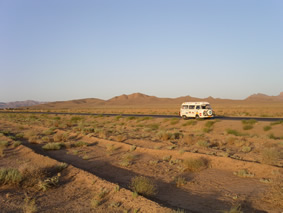 It’s 5:30 am when the alarm of our watches rudely awakes us from our sleep. Last night we met Shahram, a friend of Michel whom he had met two years ago on a previous trip to Iran. We were invited to his house, met his family and had a wonderful evening with excellent Iranian food. Michel: it was great to meet Shahram again as he had helped me a lot two years ago with finding my way in and around Iran and Tehran. So we chatted for hours and it wasn’t until one in the morning when we got back to the Mashad Hostel.

Unfortunately, we had to get up early to avoid the nightmarish traffic of Tehran. We could have slept longer but for two reasons we didn’t. The main reason is the traffic. We did not want to risk an accident as we had seen too many happen the last few days. Last night for example when we were waiting for Shahram in front of our guesthouse a car rammed into a motorcycle right in front of us. The motorcycle and driver skidded over the street and came to a stop 10 meters further. The car didn’t even react and kept on driving. The second reason for leaving early, we heard last night from Shahram. According to him you need a permit to drive in the area around Khomeini square and Amir Kabir street in between 6 in the morning and 7 in the evening. We did not know as we had arrived after 7 and nobody had told us.

To avoid all these problems we left early and with success. No problems with police, who were already waiting to write a fine, and fortunately no traffic problems. Outside Tehran traffic was wonderfully quiet, roads are perfect and we enjoyed driving again!

On the way to Esfahan we passed the shrine of Imam Khomeini. We visited the site and were impressed with grand scale of the site and the golden domes. Unfortunately there is still much construction work going on and it looks half finished. We were also amazed by the number of visitors who camped on the parkinglot and in the hall itself. We even saw a guy who had rolled himself in a carpet and was struggling to get out! A great place for free-camping… if we had known.

We continued our way past Qom towards Kashan, a small city with a beautiful old mud brick centre. We had found some Dutch hotdogs in the car and prepared them in the centre. This caught quite a bit of attention from passing locals who all had a peek in the campervan. We visited a nearby mosque, got a tour by the local caretaker and had a stroll around town.

The road to Esfahan through the dessert is an impressive one. The nothingness of sand and stones is even better then we expected. We had a small detour to the village of Abyaneh, a small mud brick village tucked away in the mountains. Michel who was tired of driving had a rest here and slept in the car before exploring the town.

The last bit through the dessert was even more impressive as the sun was setting as an orange flaming ball and the soaring heat of the day disappeared, leaving a nice cool breeze. It was just before dark when we arrived in Esfahan, in search for a place to stay.