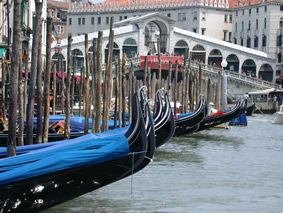 From our beloved campsite in Verona we decided to make a daytrip to Venice. Instead of driving ourselves, we decided to take the train.

When you get out of the train station in Venice, you find yourself straight away amidst some of the greater canals. Gondolas pass by and the first thing you notice is that they are not the sole way of transport. Everybody and everything moves over the canals. We saw police and even an ambulance passing by. We jumped on what seemed to be a bus boat (the nr 1 ferry), which was advertised as a cheap and convenient way to get a taste of the city. With excellent views we dreamt all the way to San Marco Square, the heart of Venice. This for only a few euro’s.

Lovers as we are, we decided to check out the prices of the gondola’s.We approached a friendly gondola man named Stefano.Before we started haggling over the price we decided to explain the reason of our journey, in the hope this would soften him a bit. 70 Euro’s and not a penny less!!! As this exceeded our daily budget by far, we decided to postpone our lovetrip until we are rich and famous. Stefano told us that Venice has been hit by the euro and the bad economy as well. The war and terrorist threats made tourism drop till 20 percent of its normal value. Did we see an American…..? He even told us that two days ago a man had entered the San Marco Cathedral and had shouted he was from Al Qaida and had planted a bomb!! The square had been closed for several hours and fortunately it appeared to be a hoax! But it damages the flow of tourism he explained. It’s not good for you and not good for me!

So instead of a bit of romance we headed to what was the house of Marco Polo. Marco Polo has written this famous book about his journey to China. He set off in 1271 and returned twenty years later! The route he took is still known as the silk route. As we will travel most of this route we had to see the place where he lived.

Venice is also an odd place. There is tourism, loads of cultural heritage, the 150 or so canals, the labyrinth of alleys and 409 bridges connecting the 117 islands. All in all an excellent place to loose yourself and dream away to ancient times.