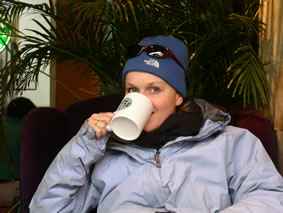 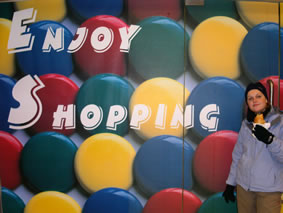 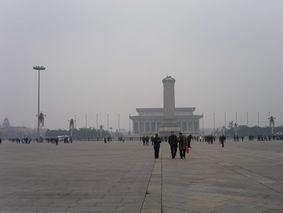 Beijing equals shopping. There is no doubt about it that Beijing is a shoppers paradise. No city in the world, we reckon can surpass this. For everyone there is something. There are posh shopping avenues for designer clother, the pearl market for guess what… pearls and the silkmarket for silk and other dirt cheap goodies. There is a lot to see in beijing as well and seeing all the sights can easily take a full week. Sightseeing and shopping… what else do you want! This makes Beijing very special!!

The most famous man in China, Chairman Mao is still residing in Beijing. He has found his last resting place on the middle of Tianeman Square. Same as some russian leader and his southern vietnamese neighbour Ho Chi Minh, Mao is placed in a Mausoleum and believe it or not…. on display for visitors and admirers. We have to see this for ourselves.

After depositing our belongings across the street we take place in the line next to the mausoleum. Three people with loudspeakers make sure everyone is neatly alligned. We both wait in curiosity. When there are enough people in the lign, we can march. The people with loudspeakers make sure we march at the right pace and keep going. Then the whole group is halted and asked if they want to pay their respect to Mao by buying some flowers. For one or two yuan you get a bunch of fake flowers shoved in your hands. Quickly as everybody seems to be in a hurry. Why we don¡¯t know…. it¡¯s not that busy and Mao isn¡¯t going anywhere?

We enter the hall and see a huge statue of Chairman Mao. The people who bought the flowers can place the them in trolleys underneath the statue. Convienient as the trolleys can be rolled back to the selling point we just came across. It seems good business and we wonder if Mao would have ever allowed this. We are still moving at a steady pace to the next room but slow down just before the entrance. This is it.. this is the room where he lies we whisper. We enter the room and see a glass casket with Mao¡¯s body in it. A strange and eerie sight we must say. All dressed up with even the wrinkles still in his face he just lies there, adored and stared at by the visitors. Too be honest, we don¡¯t know if he is real. We have never seen a balsemd person before but it looks like a doll from the madam tussaud wax museum. We pass by the body and leave the room.

Before we know it we are surrounded by people selling Mao memorablia. No way… Mao has gone commercial! Mao calenders, watches, clocks, lighters, posters, stickers, tea sets name it. Everything can be sold with Mao on it and people are pressing us to buy it. We don¡¯t… but know one thing for sure. Communism is gone in China.

« BEIJING, WE MADE IT The pressconference »