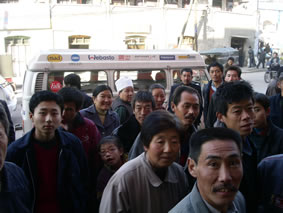 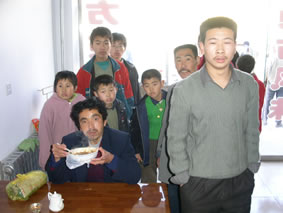 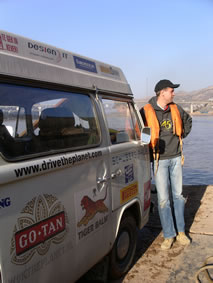 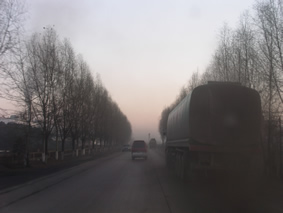 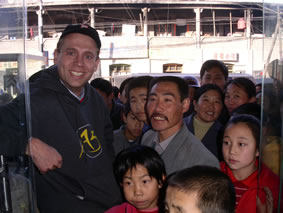 Pingyao, an ancient walled city south of Beijing in Shaanxi province, is our next destination. 490 kilometers to drive¡­ my god. This is the longes stretch we have to drive so far. Not only in China but the longest of this expedition. 490 kilometers is nothing you would say. That is drving from Amsterdam to Paris. But with a car that drives a max of 80 k an hour on roads where the average speed is 50 it turns into a 10 hour drive non-stop.

The roads are good for a change although we are afraid to see a bad stretch around every corner. The scenery is beautiful as we drive through a narrow gorge with people living in cavehouses. We come across lively and colourful markets making driving quite a bit of fun.

Half way, in a village next to the yellow river we stop for lunch. Even before we get out of the car we are surrounded by 40 or so curious locals. They never see westerners here and we feel like two Hollywood celebrities. A policeman starts taking pictures of us and every move we make is closely watched by the local population.Hippie, our car is also inspected from top to bottom.

We head inside a restaurant for some noodles but here we are not safe as well. The locals pour into the restaurant and within no-time our table is surrounded by 20 or so locals who are highly interested in seeing two westerners eat noodles. 15 minutes later, the locals still there, we finish our meal and leave.

Just before we leave we are told that the bridge across the yellow river is under construction and that the only way to cross it is via a boat. These selfmade boats are run by locals who are asking astronomical prices.

The first bridge is 200 km further and we have no option then taking the boats and pay. A mud road is leading us to the boats and hippie has difficulties getting there. This is the last we wanted.. a 4 wheel drive track and we are worrying about damaging the car. Like a bunch of criminals the locals operate the ferry crossing. Jason asks around and informs about the prices.

They start with 300 yuan but he manages to get it down to 240. Michel doesn¡¯t agree with the price and gets out of the car. How much he sais with a big smile. 240 the man reply arrogant and when michel sais its not good enough they start laughing and say Bye bye¡­ But michel doesn¡¯t give in and asks Jason to explain about the journey. Then he even braces one of the guys and sais 200. It works¡­he gets it for 200! Another driver gets angry as he just paid 240. The locals don¡¯t car.

Getting on the selfmade ferry is difficult. Hippie gets stuck in the rivermud. The angle onto the ferry is quite steep and only with 4 guys pushing we get Hippie out of the mud and on the boat. A quick inspection of the bottom of car reveals no damage. Then we are handed lifesaving jackets. Small ones that can carry a child. Better then nothing we laugh and put them on. We pray for the boat but it seems to hold. On the other side we get of more easily then we got on. Minutes later we are on the tarmac again.

Shaanxi province is well known for its coal industry. We notice immediately. The whole area is covered in a thick layer of black dust. We taste coal, smell coal and everywhere we look people are covered in black dust. This must be one of the most unhealthiest places to live, we wonder and also the main source of the green house effect. A horrible sight.

Heavy traffic consisting of overloaded trucks with coal block the road making driving difficult. The tarmac is also broken because of this lowering our average speed even further. It isn¡¯t until 8 in the evening after more then 11 hours on the road when we enter the ancient gates of Pingyao. It feels like stepping back in time. We have made it!

« Communism of the past Stepping back in time »