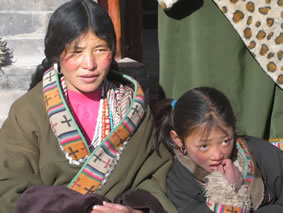 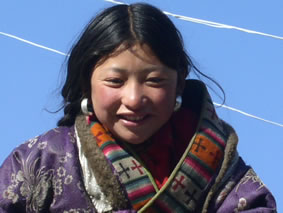 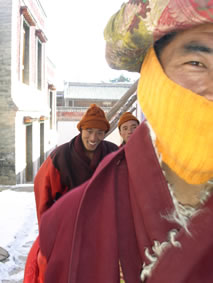 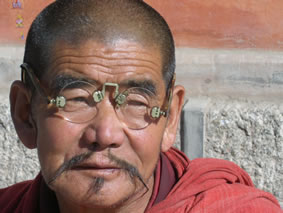 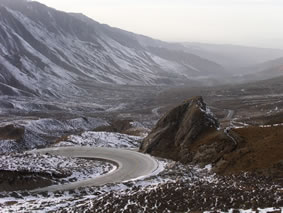 We have a good night sleep, something we needed desperately. We pack the car and head towards the Tibetan Yellow Hat Temple complex Ta-er Si. The evening before we had not seen any monks or nice buildings. But when we leave the hotel, the streets are full of Tibetans, all dressed up in their traditional clothes. The men and women, with their longsleeved coats wander the streets. We notice it’s quite a mix here. Hui Chinese with their traditional white hats, Tibetan locals and monks live here next to each other. We find the entrance of the Temple complex quickly and park the car under supervision of curious men and women. We still can’t see the grand scale of the site and have no idea what to expect. But when we enter the complex via the main gate we see immediately why this is called little tibet. The complex is sort of a small version of the Potala Palace in Lhasa. Smaller but still nice. We walk past the 8 Pagoda’s and continue our way through the monestary. Pilgrims are walking around as well making this a perfect place for taking pictures. The people are friendly and all want to pose! We are a sight for them and they for us!

The temples are colourful and full of buddhist relics and statues. One temple is even a bit bizar. A buddhist monk is playing a drum and when we look up we see all kinds of stuffed animals looking down on us. Not small animals but big ones like Yaks. The highlight (well the whole place is a highlight) is the temple with the butter sculptures. Huge delicately carved buddhist figures and beautiful flowers are carved out of yak butter. A masterpiece of art!

Before we leave to Xiahe we need to go to the toilet. We hesitated to write about this as it is really personal. But going to a public toilet in China is a experience. There are several kinds we have encountered. There are ones made out of a huge concrete plate with holes in them. Underneath is an open area where all dirt is collected on highpiles. You can probably imagine the smell in those places. It’s why we see most Chinese smoking there while having a dump. Some holes are so big that you have be an olympic gymnast not to fall in them. Privacy you dont have as there is only a wall in between the toilets and nothing in front. Some toilets even don’t have these and then you can watch what your neighbour has been eating! These toilets we skip and try to find a bush.

One thing we find strange is that on those piles is no toiletpaper (yes we looked down!). Secondly, there is no running water available, like in india, to wash your bottom when your finished. So this leaves us with the question…. how do they clean themselves. We hope it’s not by using that one long fingernail most Chinese have.

Here at the temple complex we come across another version of a public toilet. In terms of privacy it’s okay as you have a place that can be closed by a door. But as soon we enter we notice a open gutter running across all toilets. Water is running in it and that is the place where one should deposit ….well you know what. The gutter runs on an angle downwards we find out quickly. How we find out? Well we are not in the ‘highest toilet’. After depositing a true Dutch gift michel suddenly notices that the belonging of a man in the ‘highest toilet is flowing downwards and is getting stuck underneath him. The Dutch are good at building dikes and waterworks but this one is too good. The flowing water starts to rise nearly overflowing the gutter. Michel can barely escape.

After the horrific toiletexperience we leave. There are two roads leading to Xiahe. One via Lanzhou, the route we came from and one via the tibetan plateau. We ask around and nobody has ever been there. We make the grave mistake of taking the tibetan plateau route. The route is gorgeous but runs through the mountains. At a 3500 meter pass the road is full of snow and sometimes very slippery. When we reach the highest point safely the road ends. A dirt track is leading down. Going back is not really an option as the roads were slippery and going forward doesn’t look inviting as well. We hope it’s not too long a drive. Three hours later, it’s nearly dark and we are still bumping around. This is the place we where we would have lost the rack if we did not dismantled in Lanzhou. We are happy to reach Linxia. The road is good and we can drive on to Xiahe. The planned four hour drive is now already eight hours. About an hour before Xiahe we end up in a traffic jam. We decide to pass it and see what is happend. Snow and ice on the road have caused a massive collision. A truck with Yaks is collided with a tourbus and both ended up a few meters below, besides the road. A bit further two other truck collided. We quickly check if we can pass but a crowd stops us. First a policeman has to arrive. We wait and the crowd in interested in us and the car. With torches they shine into the car having no scrupulous or shame at all. We feel like monkeys in the zoo.When 40 minutes later the police arrives we are given a go. We don’t dare to drive fast anymore and another hour and half later we arrive dead tired in Xiahe. There we meet two dutchies who had been in the collided tourbus. Miraculously nobody got injured. Long time to talk we don’t have as all restaurants are about to close or closed. One is busy closing but after some begging we manage to convince them to cook some food.

« A difficult decision to make Heaven on earth »