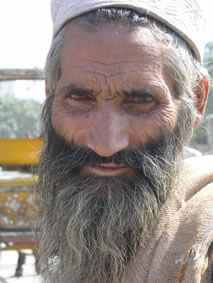 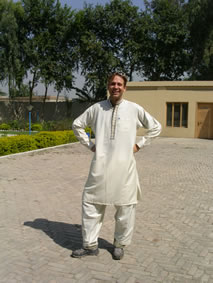 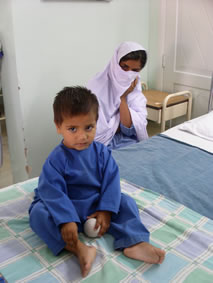 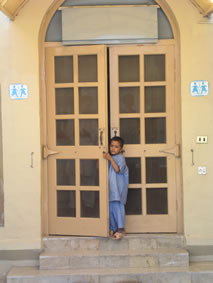 Peshawar and the tribal area’s in the north western frontier province are under a great Afghan influence. This is caused by millions of refugees who crossed the border escaping the taliban rule and the war that followed. This left millions of people stranded and refugee camps were built. Even the streets of Peshawar are dominated by Afghans and tribal members. Heavy beards and rough faces are seen everywhere.only a few women in full burka’s or tents are seen on the markets. No westerners except for us and the other Dutch couple.

Due to the poor conditions the Afghan refugee children are brought up in, SOS has set up a children’s hospital. As we are in the neighbourhood and interested in the refugee situation we ask if we can pay a visit. We are picked up by a staff member of the hospital and a security guard. On the way to the hospital we ask if we can stop for a few seconds at a horsemarket to film and take some pictures. Just as Elles is filming i notice that the security guard, who is standing next to elles, is taking his gun from his holster and keeps it ready. I look around but cannot identify a reason but not to take risks i warn elles to stop filming. We decide to return quickly to the car. Then we leave and continue our way to the hospital.

When we arrive and see the first children we are shocked. Images you normally see on television, we now see for ourselves. Malnutrition, hepatitus and malaria are the main causes children end up in the hospital. When we see a little boy of one and half years old weighing the same as a newborn we are even more shocked. SOS doesn’t only help the children but try to educate the women as well.A difficult task as it’s the men who rule here and they are the ones that cannot be reached or taught.

At the end of the visit Michel receives a package from the SOS village in Lahore. Elles had got a Pakistani dress for the wedding and the ladies from the office had decided michel should not leave Pakistan Empty Handed. So the made sure he would go in style and well in a Pakistani dress. How they did it and got the measures perfect we don’t know but if fits just super! All employees of the hospital wanted to be on the picture and it was a fun way to end the visit!

In the afternoon we visited the old town and made loads of pictures. Although the area is dominated by men, the scene was more relaxed then we thought it would be, especially after the horsemarket incident.

« Return to the tribal area’s Guns of the Khyber Pass »