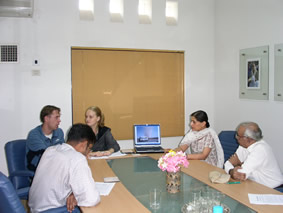 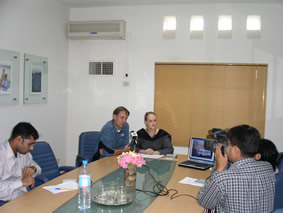 One of the many reasons why we went back to the SOS-Village in Lahore was the fact that we could have a pressconference. We have had quite some publicity around this trip already but never a real press conference. Several Pakistani newspapers were invited as well as a television Newstation. So there we were, prepared with cd’s with pictures of the trip and a press release we made for SOS. We were exited and a bit nervous at the same time. What kind of questions will they ask and how does a press conference really works. One of journalists, a friendly man, came a bit early and we started immediately.We told him about the journey and he asked us questions about what we had seen and what our plans were. Then the television crew arrived and we started all over. A huge microphone was placed in front of us and together with one of the ladies of the SOS headoffice we told about the journey, and what had happend so far. Then another newspaper reporter arrived and we answered all questions as good as we could. The final question was ‘what would like to tell the readers of the newspaper? We looked at each other and said: ‘We hope that we can bring across one message. The message that if you donate money to SOS, your money is very well spent! Lots of children benefit from the work of SOS!

Then we finished and were all very much pleased. In the afternoon we spoke to another broadcasting station and heard that there is a chance that we will be interviewed again on Monday! How cool!