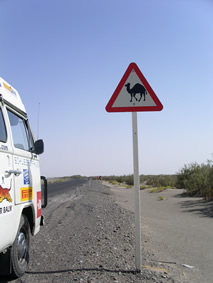 We know we have a long ride ride ahead of us to Pakistan and wake up at 6:15. We pack the bus, load it with lots and lots of water and check the oil. Its 7 o’clock when we are ready to leave and we are greeted by akbar, the owner of the guesthouse. He wishes us all the best for the future and safe travels. Then we hit the road and head to the border, some 400 kilometers from Bam.

Quetta, our first big destination in Pakistan lies in Baluchistan, an area known for its lawlessnes and violence amongst the inhabitants. We are advised not to drive at night and either drive to quetta in one go or stay the night safely at a militairy post. As we can’t drive very fast we will probably have to opt for the second option. Just before Zaheden, the biggest town before the border we fill up with as much cheap iranian petrol as possible. The petrolstation at the border are closed which explains the long rows in Zahedan.

We arrive at the border at around 2 o’clock. The heat is inbearable and we hope for a quick passage. Always exciting to cross a border and we are wondering how it works here. Will it be waiting in the scorching sun or are they efficient? The area is huge and we have no idea where to go.

We have come to the conclusion that if you keep on driving and miss a place or a stamp, you will be re-dirtected by the first official you meet. This works faster then asking around the whole time. We are talking about quite a number of stamp and signatures which need to be received in a certain order. As we expected we had missed the carnet de passage stamp and were re-directed to a building that looks closed but later appears to be open.

Two hours late and a few stamps and signatures richer we arrive at the customs check of Pakistan where we are asked to wait for half an hour. Within minutes we are sleeping on the chairs in the middle of the waiting hall. We must say that they are unexpectedly stipt coz half an hour later they were stamping our passports. Then we are told that there is a great chance that we get a safety escort through Baluchistan. ‘Pakistan very safe, not need to worry’ is added quickly. Mmmh, ok…. but half an hour later, while driving into Baluchistan, there is still no sign of an escort.

The road to Quetta can’t be missed. There is practically one road the whole area. We are driving on the left hand site now and the person on the passenger seat needs to check if we can pass trucks and cars from now on. We are heading towards Nok Kundi where there is a customhouse which is supposed to be a safehaven for overlanders. Basically a place where they can spent the night without getting robbed or mugged. The road is beautiful and we see our first wild camels cross the road.

We arrive just before sunset and the heavily armed men start smiling the moment we ask if we can spent the night there. ‘No problem’, and they invite us in. safe behind a guarded wall, what else do you need! The guns are put at rest and we are welcomed by a few friendly men who explain that they have a toilet and washing facilities available. Perfect! We park the car on the dusty car park and when we pop up the roof, we are approached by several curious men. They are very much intriqued in our kitchen, especially when we start to prepare the Go-Tan noodles we brought from Holland. The package is inspected by several men including all other ingredients. After the meal, we are invited to drink some chai. This heavily sugared tea makes us wonder how much damage it will do to our teeth and if we can sleep afterwards. Half an hour later and two cups of sugartea we crawl to our bus. A good night sleep is what we need.

Its not the tea that keeps us awake but the extreme heat (40 degrees or so) that doesn’t seem to dissapear from the car and the strong wind that blows across the desert. In the middle of the night Michel crawls out of the bus to open the backdoor, but it doesn’t seem to have any effect. Although we catch some more wind, the heat of the wind is still unbearable and it feels like if someone blowing with a hairdryer in our face making it difficult to breath. Knowing that we have to drive one of the hardest parts of this journey tomorrow makes us worrying for a while. At around 5 in the morning we finally fall asleep to be awakened again by the morning prayers. At 6:30 we get up, dead tired and broken of this awful night.