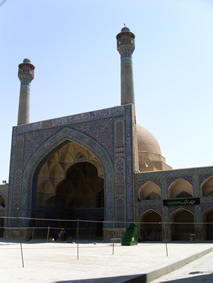 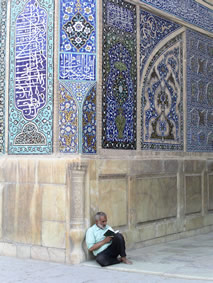 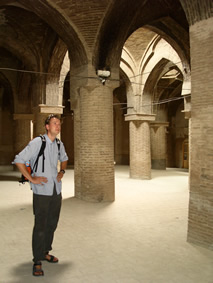 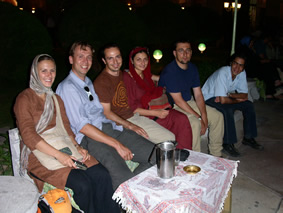 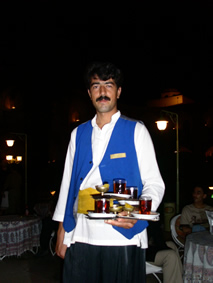 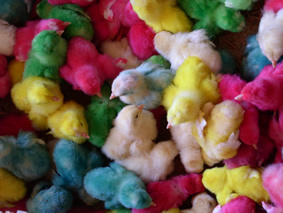 After a dreadful 3 hour internet session with a seriously bad connection we were happy to head into the beautiful centre of Esfahan. We headed straight for the Jameh Mosque. The first bit, which consisted of beautiful columns, really gave us the idea of how the mosque had been in the old days. When we entered the courtyard, we were invited to go “backstage” and see the winter room and a beautiful carved mihrab (stone that points to Mecca. The guy turned it into a real show and made gestures it was not really allowed to film but that it was alright for us. We had no idea if this was true and filmed what we could. But when he finished the tour he was eager to get a tip so it could have been a show.

We headed back through the amazing labyrinth of the bazaar and were impressed by the length and the number of shops. There we came across a most peculiar thing. Painted chick lets. We tried to find out what the purpose was of painting these cute animals in the most bizarre colours but didn’t get a straight answer. Horrible it was although the animals did not seem to care.

At the entrance of the bazaar on the side of the square is an amazing teahouse situated on the first floor. This place, visited by locals and probably every tourist in Esfahan, has the best views of the imam square, the palace and the imam mosque. We sat down, enjoyed a hubble bubble (water pipe) and a pot of tea. An excellent place to sit down and contemplate the beauty of Esfahan. After finishing the tea we headed to the Imam mosque for another visit and to do a bit of filming. Perfect timing as the sun was setting and the light was beautiful.

There we met a Suisse and an Italian couple. Together we had dinner and ended up in the courtyard of the Hotel Abassi exchanging travel stories.